Stephen Lynch, an assistant professor of mechanical engineering at Penn State University, was hard at work on a heat exchanger, after spending a good deal of his career focusing on heat transfer engineering.

Stephen Lynch, an assistant professor of mechanical engineering at Penn State University, was hard at work on a heat exchanger, after spending a good deal of his career focusing on heat transfer engineering. He didn’t know it at the time, but it would ultimately lead him into the field of automotive manufacturing, and working with Volvo on improving heat exchangers for diesel trucks.

From Proof of Concept to Volvo

During his team’s work at Penn State, one of the team members wanted to see if it was possible to create a heat exchanger where the air goes across the device in a cross flow direction. “In my lab, I said we can come up with the test rig to come up with its performance,” he says. “Some of the wall thicknesses were not sufficient for supply pressures so we were not able to get a good performance indicator on that, but it was promising in the sense of manufacturing technology being able to print features that were as small as modern conventional heat exchanger components.”

The big advantage, he says, came from additive manufacturing, and when a design challenge came along from Volvo, they were ready. With the ability to create a heat exchanger using a larger variety of materials for essentially the same cost, the team eventually settled on using stainless steel for the Volvo project, after first trying aluminum. “There is the possibility if you need higher tolerant material that you could print it in a high-temperature alloy, for example,” says Lynch.

The study his team proposed for Volvo was called “Optimized Diesel Engine, Exhaust Waste Heat Recovery Components Via Additive Manufacturing.” The problem they tackled is that diesel trucks lose a large amount of energy with regard to fuel efficiency, with a little more than 60% of the energy in fuel lost as waste heat in the exhaust, he says. With waste heat recovery, the team wanted to recover at least some of that energy to use for the vehicle. With refrigerated trucks, for example, they want to use waste heat in a refrigeration system that actually converts the waste heat into refrigeration for the truck, he says.

Before Volvo, the foundation of the heat exchanger Lynch worked on had been improved a bit and the pressure drop increased, he explains. “That’s not a great thing necessarily but there’s potential to improve the performance of heat exchangers through some optimal designs that we have yet to identify,” he says. “That’s where the idea of the additive manufacturer heat exchanger started. Then Volvo had the call for projects.”

After being chosen for the project, Lynch’s team connected with a contact at Volvo in France, who was working on waste heat recovery systems and acted as a kind of technical monitor, he says. 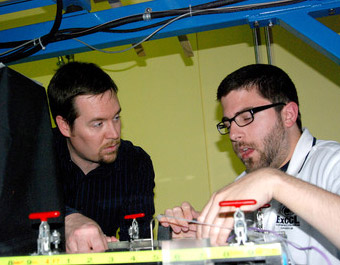 In the first month, they tried to align initial intent with what the technical monitor advised, focusing on scope for cost and time needed. “For the alignment, we decided to model it off of an existing waste recovery system they are working on in their trucks,” he says. “The initial baseline is actually freestanding geometry for conventional waste heat recovery systems but we take that baseline and take computational fluid dynamics to model novel shapes and determine their effectiveness computationally.”

But it wasn’t enough in his mind to understand the material aspect of what the additive manufacturing would be. For instance, they designed up to 20 different shapes for the fin geometry in the heat recovery exchanger and now they’re getting parts back from the vendor. They recently printed the parts and will do tests to see if the computational model was accurate to design them.

Eric Butterman is a Dallas-area freelancer who has written for more than 50 publications, ranging from Arthritis Today and Glamour to Kiplinger's Retirement Report and EXEL, a research magazine for Drexel University A frequent contributor to Jindal School publications, he wrote the New Faculty profiles in the Autumn 2015 issue of MANAGEMENT magazine and the cover story, “Advisory Council Connects to ‘The JSOM Experience, From a Student Perspective’ ” in the Spring 2015 issue.